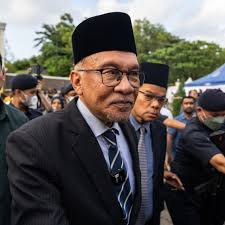 Anwar Ibrahim finally realised his over-two-decade dream of becoming Malaysia’s prime minister on Thursday following a tortuous detour in the political wilderness that included prison stints for sodomy and corruption in what he maintained were politically motivated charges aimed at ending his career.

A day after the 2022 Malaysian general elections, the country’s longstanding – and long suffering – opposition leader used the first person to teach journalists a lesson in resilience and political longevity. “This you need to learn from Anwar Ibrahim – patience, wait a long time, patience,” the 75-year-old politician told reporters outside his Kuala Lumpur home.

In his decades-long quest for the top job, Ibrahim has tasted political triumph and defeat, led street protests for democratic reforms and strung together a multi-ethnic opposition coalition while behind bars. His bumpy road to the pinnacle of power came to completion on Thursday when he was sworn in as prime minister after days of political deadlock resulting from an inconclusive election.

Back to Top
Close
X
Ukraine works to restore power after bruising Russian attack…Newswire HANNA ARHIROVA FROM APKYIV, Ukraine (AP) — About 70% of the Ukrainian capital was left without power, Kyiv’s mayor said Thursday, a day after Mo…

X
50 police killed in protests, says Iranian official…NewswireDaily Nigerian Around 50 police have been killed in the protests shaking Iran since September, the deputy foreign minister said on Thursday, givi…