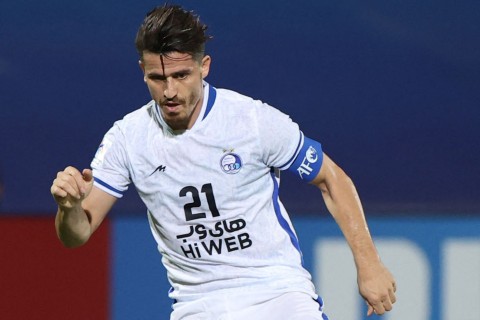 Iranian international footballer Voria Ghafouri has been arrested over accusations he ‘spread propaganda’ against the Islamic republic.

The right-back was arrested by Iranian security forces after a training session with his club today.

He was arrested on charges of having ‘tarnished the reputation of the national team and spread propaganda against the state,’ an agency said.

Ghafouri, 35, who plays for Foolad Khuzestan in Iran, has been a vocal critic of the regime and its violent crackdown on protests.

He was listed as a member of Iran’s 2018 World Cup squad but was not named in the final lineup playing at this year’s World Cup in Qatar.

Originally from the Kurdish-populated city of Sanandaj in western Iran, Ghafouri had posted a photo of himself on Instagram dressed in traditional Kurdish dress.

Many Iranians have turned against their national football team amid the ongoing unrest in the country.

They see the team as representing the regime rather than the people of Iran.

Back to Top
Close
X
Uruguay held by South Korea in entertaining drawWorld CupNothing could separate Uruguay and South Korea in their World Cup opener in Group H despite plenty of attacking quality on show in Qatar.In front of a…