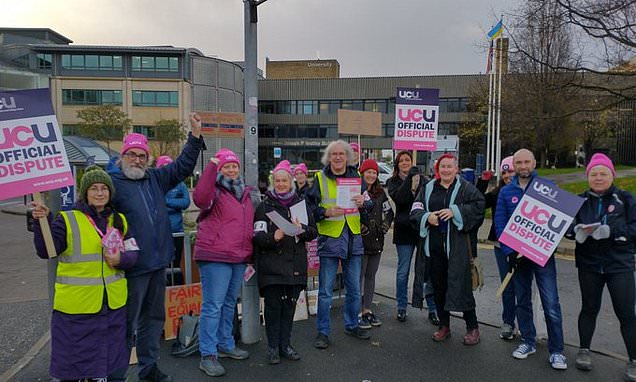 Around 2.5 million students will have their lessons disrupted as 70,000 lecturers and university staff hold their biggest-ever strike today and vow not to reschedule any cancelled classes, while almost every school in Scotland shuts as teachers walk out.

University and College Union (UCU) members will walk out at 153 universities over pay, conditions and pensions today, tomorrow and next Wednesday.

Classes are expected to be cancelled and libraries may close, with strikers refusing to reschedule missed work or provide online catch-up as pickets are set up across the country.

Meanwhile, every school on the Scottish mainland will be shut as thousands of teachers picket their workplaces and members of the Educational Institute of Scotland (EIS) demand a higher pay packet, with warnings of more strikes to come.

Education Secretary Shirley-Anne Somerville warned the Scottish Government’s budget is under ‘extreme pressure’ and the 10 per cent rise demanded is ‘unaffordable’ after a last-ditch offer was made in a bid to avert the strike.

But Andrea Bradley, the union’s general secretary, dismissed the latest proposal, in which the lowest-paid staff receive a 6.85 per cent increase with most getting a 5 per cent rise as ‘simply a lazy reheating of the offer that our members have already rejected’.

More than 70,000 lecturers at 153 universities across UK begin strikes -and it's first in nearly 40 years

X
Elon Musk discovered a closet full of T-Shirts at Twitter HQ. Here’s what …RifsThe woke Twitter tees were seemingly forgotten leftovers from the pre-Musk era at the company, and the message behind them was explained by the platfo…